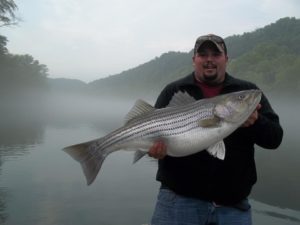 Wolf Creek Dam, which holds back the waters of Lake Cumberland, unleashes a powerful current that can be dangerous to paddlers. 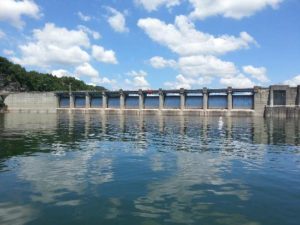 At lower water flows and when the dam is not generating electricity through its turbines, however, the Cumberland is ideal for small boats.

The first 16 miles of water from Lake Cumberland’s Wolf Creek Dam to Winfrey’s Ferry is a great place for canoeists, kayakers and owners of small johnboats to float and fish. A few mildly challenging shoals exist in this stretch, perfect water for beginning Kentucky canoeists and kayakers to hone their skills.

Floaters who wish to fish hard without a lengthy shuttle may launch at the Kendall Recreation Area ramp, located off U.S. 127 below the dam. The takeout is the old Kendall Ferry landing located at the end of Ray Mann Road, just off the road to the recreation area. This makes for a float of approximately 1.75 miles with a shuttle of just a few minutes.  This section includes the hatchery creek outflow, a good place to fish. Boyd’s Bar, a productive wading shoal for rainbow and brown trout, lies at the end of Ray Mann Road.

The next take out on the Cumberland River is a little over 4.5 miles downstream from Wolf Creek Dam at Helm’s Landing Boat Ramp, located off KY 379 via KY 55 and U.S. 127. Excellent rainbow trout fishing runs all through this stretch of the Cumberland River.

Toward the end of this float you will see two rock walls on each side of the river. Legend has it that people removed rocks and piled them near the riverbank to help steamboats power over a shoal in the river. Anglers should know this shoal is one of the most productive rainbow trout fishing spots on the Cumberland River.

From Helm’s Landing on the Cumberland River, it is a 5.8-mile float to the next take-out at the Rockhouse Natural Bridge, located off KY 379. In this section, the river is a series of shoals and long pools.

Anglers working the rocky edge of the flowing shoals and pools score on a mixture of rainbow and brown trout. Near the end of this section, floaters will see the Cumberland River take a hard left turn at a high bluff. This is the Rockhouse Hole. The Kentucky Department of Fish and Wildlife Resources recently purchased the island on the downstream left, just above the Rockhouse Hole. This island shoal is Long Bar, although some refer to the area as Snow Island. It is one of the better wading shoals on this section of the Cumberland River. Anglers may beach their boats on the island to fish this area.

The Rockhouse Natural Bridge take-out requires you to carry your boat through the arch and up a steep incline to the parking area. This take-out is not recommended for anglers in johnboats. The Rockhouse also serves as the put-in for the next section of river.  Although the float from the Rockhouse to the next take-out at Winfrey’s Ferry is 5.5 miles on the water, the shuttle is just 1.5 miles. This is because the road connects the neck of a large bend in the river.

A single paddler could drop off a boat in the Rockhouse parking area, drive down KY 379 to Winfrey’s Ferry, then walk back, leaving the vehicle parked at the end of the float.

Rainbow Run, one of the best fishing shoals on the Cumberland River, is just downstream from the Rockhouse Natural Arch. A long gravel bar on your right denotes Rainbow Run. The entire length of this shoal is worth many casts.

Class I rapids downstream of this area provide lively paddling. A little further along on this float is Winfrey’s Rocks at downstream left. These rocks served as signposts for boat pilots back during the steamboat era.

The rocks, located halfway through the float, mark a deep hole that holds bruiser brown trout. Striped bass also show up regularly from this section downstream. 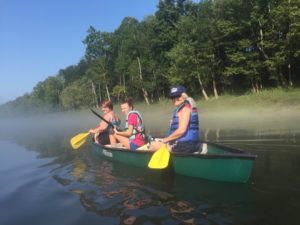 The rest of the float is a long, deep hole until Winfrey’s Ferry. Look for a cable that goes across the Cumberland River. This cable indicates the take-out downstream to the right.

The Cumberland River rises quickly when electrical generation begins from the dam. Powerful current created by more than one generator in operation makes the river unsuitable for paddlers. Log on to the U.S. Army Corps of Engineers Nashville District Web site at www.orn.usace.army.mil/ and click on the Recreation Info tab, then the Fishing Information tab followed by the Lake Cumberland tab. The daily fishing report contains the 24-hour generation schedule for Wolf Creek Dam. Boaters may also call (606) 678-8697 for current information. 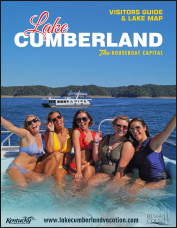